Michael Deguara received his certificate of accreditation for the Smartcane BMP Soil Health and Nutrition module, a critical module in the eventual roll-back of regulation for the sugarcane industry and one which covers of on a key issue for the farming community – nitrogen use efficiency. It’s one of seven that makes up the program.

CANEGROWERS Chairman Paul Schembri says that the Smartcane program is shaping up to be a huge success for the industry with over 300 growers, accounting for more than 70,000 hectares, signed up to the program within the first few months of its launch.

Mr Deguara says while it wasn’t as easy as he had expected, he believes the rigour in the system will be the thing that sells growers, industry, government and the community on Smartcane BMP being the system they can hang their hat on.

“Going through the module made us think about everything we do on the farm. That’s the thing about best practice – there are always new ways and better technology around the corner. 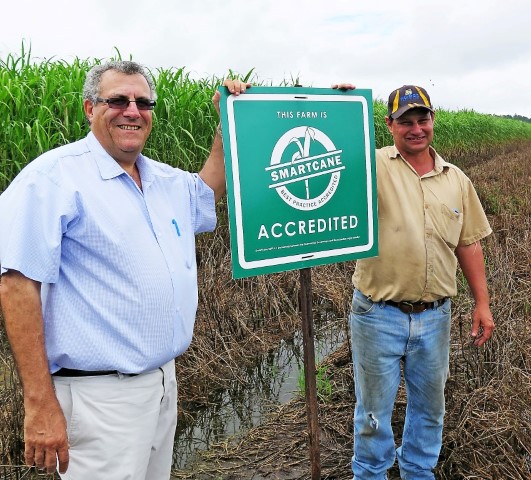 “I think growers will appreciate being able to know for certain they are doing the right thing – and as we go along, this Smartcane system is going to help us keep thinking about any new practices and technologies we could or should be using.

“Working on several of the seven modules as part of Smartcane BMP has given me the confidence that Smartcane BMP will definitely provide a watertight assurance to the community that the Australian sugarcane industry is leading the world in environmentally sustainable farming.”

Paul Schembri says the early success of the program is a credit to the Queensland Government for taking a strong, proactive partnership approach with industry.

“We thank Premier Campbell Newman on his initiative of partnering with industry to develop a best practices system and Minister for Environment, Andrew Powell, and Minister for Agriculture, John McVeigh, for supporting the BMP approach to a place where we can now get growers from across the State through as many modules as we can and really show our communities that our cane farms deserve the reputations they have worldwide as being leading edge growers of sugarcane,” Paul says.

He says the government’s support will help growers shift from regulation to an industry-led system underpinned by profitability and strong land stewardship.

You can hear Michael talking about his experience going through the Smartcane BMP module on ABC Radio here http://www.abc.net.au/news/2014-03-27/best-practice-equals-sweet-success/5350022