It’s not often that you will see all the stakeholder groups across an industry unite in support of a program, but that’s exactly what happened when the new best practices system, Smartcane BMP, was launched at the end of last year.

Not only did two government Ministers share the stage at the launch, but CANEGROWERS and the Australian Cane Farmers Association teamed up to unveil what they describe as a critical program for the Australian sugarcane industry.

CANEGROWERS said it was important that the launch was held in one of State’s 14 major sugarcane growing hubs as the program is a grassroots one whose success hinges on grower participation. And attract grower interest it did, as around 50 local Mackay and Proserpine cane growers flocked to the event held on the Deguara cane farm at Farleigh, to learn about the next big stage in the cane industry’s future.

The official start of Smartcane BMP was marked by congratulatory speeches by Environment and Heritage Protection Minister Andrew Powell and Agriculture, Forestry and Fisheries Minister John McVeigh, who were quick to pat the industry on the back for its willingness and commitment to promote and adopt best management practices.

It’s been described as a new era for sugarcane farming in Australia. Growers are being urged to sign up and work through a series of online modules, eventually leading to accreditation showing that they work to the highest standards on their farm. 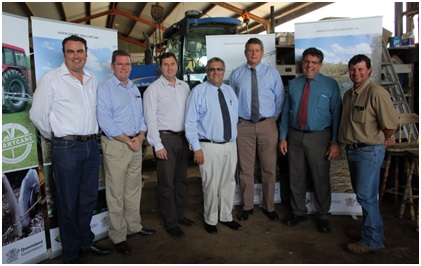 And as the number of cane farmers working through Smartcane BMP increases, the government has committed to winding back some of the regulations placed on the industry by the previous Labor state government.

Agriculture Minister John McVeigh said best management programs had already worked successfully in other industries, such as cotton and grain. He said it was now the sugar industry’s turn to take up that challenge.

CANEGROWERS Chairman Paul Schembri said growers should welcome the program with open arms because it was the much needed vehicle the sugarcane industry needed to show it can engage in self-management of its environmental affairs. “What’s more, it’s a better approach than regulation because it inspires people to get the best possible outcome,” he said.

“The key outcomes will be improved profitability and improved productivity – but let’s be under no illusion; one of the key objectives here is to demonstrate to the community that this industry has got the environmental wherewithal to convince everybody that we are an environmentally sustainable industry.”

Knowing farmers are looking after the land and their environs is something that the world is starting to care increasingly about and Mr Schembri says that by growers signing on and completing modules, the Australian industry would be able to prove its current reputation amongst its international peers as leading the world in sustainable cane farming. “This is an opportunity for us to tell our story and our story is an impressive one,” he says.

Local grower Michael Deguara, who hosted the event at his Farleigh property and CANEGROWERS Mackay Chairman Kevin Borg, both completed one of the seven Smartcane BMP modules before the launch. Michael Deguara admitted to the gathering that it was challenging. “By not being easy it will give it strength and credibility,” he said.

He and Kevin Borg publically joined the growing list of industry stakeholders who are urging growers to sign up.