Highway rolls through the bayous and cane paddocks of the Murray Flats, the landscape changes rapidly as the unmistakable jagged chiselled outline of Hinchinbrook Island takes shape on the horizon in the direction of Cardwell.

It’s the mountains of Hinchinbrook that influence the weather along this section of the Cassowary Coast, says Bilyana cane farmer Brian Machan during a tour of his 140 hectare cane farming holding.

The season’s ideal growing conditions haven’t just been to the liking of the sticks of sugarcane reaching for the sun in the paddocks around Bilyana. Broad-leaf weeds, grasses and, in particular, vines, have found the combination of reasonable rainfall and significant bursts of sunshine perfect for growth. The variety of invasive threats call for innovative solutions to manage that fine balance between maintaining productivity and farming in an environmentally sustainable manner, while minimising the impact on the Great Barrier Reef lagoon.

In addition to the more common pests such as guinea grass, it’s the bind-weed vine red convolvulus that has proven the biggest challenge to manage in recent years.

The pest vine is particularly prevalent on the more exposed end rows in the cane paddocks, where it can wrap around and kill cane.

If left unmanaged, infestations of red convolvulus have also been known to quickly take hold in the leguminous bean crops which Mr Machan has planted in his fallow paddocks.

Difficult to eradicate due to its hardiness and the capacity of its seeds to survive for many years in soil, red convolvulus is best controlled with a combination of glyphosate for knockdown using a shielded sprayer in the inter-space between rows, and 2,4-D, which Mr Machan applies periodically with a boom sprayer.

“We use the 2,4-D because vines become a big problem, a really big problem – with red convolvulus moving into the area,” Mr Machan said.

Difficult to eradicate due to its hardiness and the capacity of its seeds to survive for many years in soil, red convolvulus is best controlled with a combination of glyphosate for knockdown using a shielded sprayer in the inter-space between rows, and 2,4-D, which Mr Machan applies periodically with a boom sprayer. 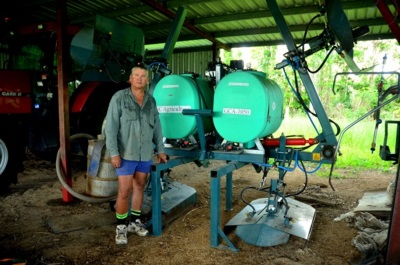 Nearly four years ago, with the assistance of funding provided through Reef Rescue, Brian Machan made the strategic purchase of a shielded sprayer from GC Agriculture in Armidale.

“We use the 2,4-D because vines become a big problem, a really big problem – with red convolvulus moving into the area,” Mr Machan said.

“Some of the paddocks, with a boom spray; we have to spray three times to stop that convolvulus.

It’ll actually kill cane, it wraps the leaves up and blocks the sunlight, it’s been here about four or five years and it’s getting spread more and more because mainly we didn’t know how to manage it.

“One spray doesn’t take it out, there’s so much seed there it just keeps coming.”

A keen adopter of innovative farming practices, particularly those methods that deliver a healthy soil profile and minimise the presence of residual herbicides in the environment, Mr Machan has teamed up with the federal government’s Reef Rescue project to help deliver solutions that are in-step with environmental best practice.

Nearly four years ago, with the assistance of funding provided through Reef Rescue, Mr Machan made the strategic purchase of a shielded sprayer from GC Agriculture in Armidale.

It’s a purchase that, over time, has paid dividends both in terms of reduced herbicide costs and improved environmental outcomes.

“I used it on the whole farm this year, it cuts down your use of residual herbicides so it’s virtually all knock down, no residuals.

“Hopefully you’re going through at the right time, knock your weeds over and the cane should close in, you get a few weeds but nothing too bad.”

The shielded sprayer is set up to spray roundup into the inter-row spacing, four rows at a time, via the nozzles beneath the hoods and gramoxone among the stools via the nozzles situated above the hoods. Getting the process right has taken time and patience and there are plenty of handy hints which Mr Machan is happy to pass on to fellow farmers.

Low water volume proved to be an issue when the Bilyana grower first purchased the shielded sprayer and he was initially less than satisfied with the effectiveness of the gramoxone spraying with the new system.

That issue was largely solved by placing a six hundred litre tank on the front of the tractor, in addition to the two three hundred litre tanks mounted on the spray rig, and increasing the volume of water in the gramoxone mix. It also meant some alterations to the spray nozzles to get the desired result.

“I didn’t use it much in the first couple of years but once I got used to the way it worked, it was mainly the low water volume that was the issue,” he said.

“The nozzles underneath are still standard they’re doing around sixty litres per hectare of water and these nozzles (above the hoods) were doing the same.

“At the moment they’re doing about 180 litres per hectare.

“Gramoxone needs to be wet and covered to work, where roundup only needs to be spots to work.

“So just by putting more water through there you get a good job, before it was hit and miss.”

The use of an additional 600 litre tank also means there is less time spent refilling and, along with the relatively cheap cost of gramoxone and roundup, herbicide costs are reduced.

“It’s putting out double what it used to and getting good results and you can do close on nine hectares without refilling,” Mr Machan said.

“It gives you about two and a half hours spraying without refilling, so if you go in the morning your back by smoko. It’s cheap too; the roundup’s not dear, the gramoxone’s not dear.”

While some cane farmers question the use of shielded sprayers in the interrow spacing due to the potential of glyphosate damaging cane and leading to lost productivity, Mr Machan says he has seen no such issues on his farm.

His advice to fellow farmers is to keep the tractor speed to about 8 kilometres per hour and be careful at the ends of rows where there is the most potential for spray drift.

“I’m prepared to stick with it until I can see any evidence on my farm that it’s damaging the cane,” Mr Machan adds.

“Pre-emergents are doing damage you can’t see and every year spraying pre-emergents it’s going to build up in your soil and that’s what we don’t want.”