A spell of wet weather prompted Michael Pisano to become the first cane grower to be accredited in the three key Smartcane BMP modules.

The CANEGROWERS Herbert River Director and CANEGROWERS Policy Councillor was among the first farmers to register for the Smartcane BMP program. Now he’s the first to have been audited in the three key modules in the program (out of the seven that make up Smartcane BMP).

Michael didn’t have to change a thing about the way he farms; he just had to prove what he was doing.
“I’d done the initial workshop and then it sat there for about three months until we got some rainy weather and I decided to get stuck into it in the office,” Michael says. “We were already using the Best Management Practices on our farm. The biggest thing was coming to terms with all the recording that’s required and the evidence to show what we were doing.”

Michael admits he found the process but a bit tough. “But with the help of our local facilitator and others, we worked through it,” he says.

“I had to formalise my nutrient and weed management plans but now that it’s done I only have to update it each year. I think over 90% of the growers in this district could look through and see that their practices meet the requirements.”

Michael and Linda Pisano’s farm at Braemeadows, east of Ingham, has no irrigation and produces 6,500-7,000 tonne on average from around 90 hectares.

All machinery is on GPS with auto-steer and matched to the row spacings. Along with most growers in the Herbert River district, Michael made the switch to green cane cutting in the 1980s and has never looked back.

“It’s probably the biggest change in farming that I’ve seen that’s been of real benefit to us. If it’s too wet to harvest you can just leave it, the contractor can go somewhere else and comeback later. 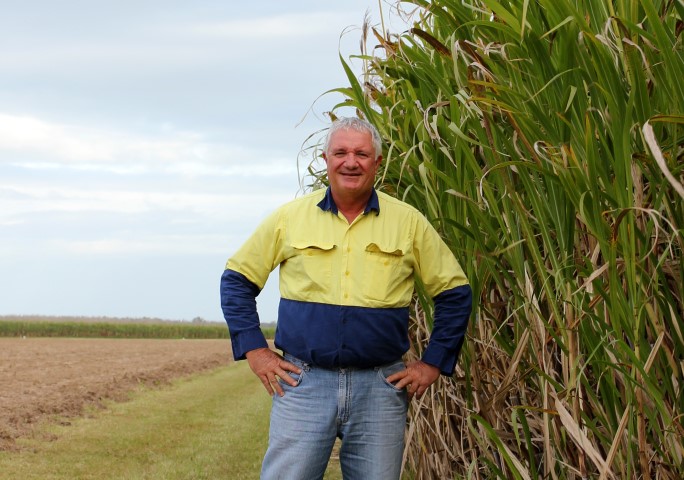 “Trash blanketing keeps the moisture in during the dry parts of the year and in the wet season the soil doesn’t move. It also keeps grasses down – we hardly ever see narrow leaf weeds anymore. It’s just the broadleaf ones which sometimes get through.”

Michael says the trash and using a high-rise sprayer that helps him target weeds have meant his chemical usage has dropped dramatically over the past decade.

An Australian Government Reef Programme grant helped him and his nephew add stool splitters to their shared fertiliser box and Michael says generally one pass with it is enough. Funding has been secured through the latest round of the Programme for a hooded spray unit.

Meandering through Michael’s farm are wide grassy lanes with swales and wetlands, flourishing with reeds, insects and waterlilies and home to flocks of ducks and other waterbirds.

This is no haphazard arrangement; it was carefully designed under an 11 year program to amalgamate into one master plan all of the drainage across 14,500 hectares of farmland between Ingham and the ocean. New drainage lines were put in, wetlands were constructed and flood lifter pumps were installed to control, slow and filter the water.

Michael is the chairman of the Lower Herbert Water Management Authority, the statutory board which now manages the flow of water across the landscape and coordinates the maintenance of the drainage lines. He believes the master plan has been a major contributor to improved productivity.

“These drainage lines are protected by law and they act as a filter system for the water. The local council came on board because it could see the whole community benefits – it’s not just an agricultural benefit.”