Brothers Darryl and Lester Cronau farm 276 ha of cane and manage a total land area of 375 ha at Pilerwa and Yerra, south-west of Maryborough. This year they expect to harvest 15,500 tonnes of cane.

One of their most significant achievements in improving their farm’s soil health has been the design and manufacture of compost making and spreading equipment. The 3-grower D.A.G group, of which the Cronau brothers are included, received SRDC funding assistance of just more than 50% of the $93,000 project to design and build a compost turner and test compost application rates.

They also received assistance from the federal government’s Reef Rescue fund to design and build a compost spreader.

In previous years, the Cronau family have grown pineapples in rotation and have seen the benefit of planting into pineapple residue. They are now out of the pineapple industry and have been making compost since 2008.

“At the moment we use mill mud, pine sawdust and chook manure to make the compost and we are doing trials as part of the SRDC project to determine optimal application rates,” said Darryl Cronau. Using a filter press means that there is generally no need to add any water during the composting process as the mixture heats up well.

They need to turn the compost two to three times a week to keep the temperature down to the desired 55– 65°C. In time the group hopes to source city waste in the form of green waste and bio-waste.

The compost turner has several unique features incorporated into its design, including the ability to add micronutrients while mixing the compost The complex articulation mechanism allows the tractor to turn without needing to turn the turner and it can be transformed into a trailer to be moved along the road between farms.

“Having the micronutrient box as part of the turner means we can custom-build composts to meet the specific nutrient needs of a paddock or crop,” said Darryl.

The group’s unique compost applicator can apply 9–12 t/ha of compost into the ground, through the trash blanket.

“The compost is 2% nitrogen, 2% potassium and 1.5% phosphorus and at this rate easily supplies enough nutrient for the cane, remembering that half to one-third of the nutrient is available to the cane in the first year. 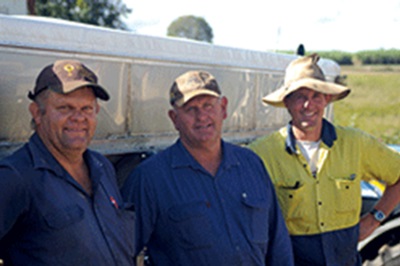 The application rate trial we have set up will fine-tune the rates needed to have a lasting beneficial effect through the cane ratoons.” “We apply the compost using GPS to place it along the soybean planting rows. It’s like planting the soybeans into potting mix,” says Darryl.

“After the soybeans we plant cane into the same rows. We have cut back on our nitrogen for the plant cane crop to utilise the nitrogen from the legume and the compost.”Darryl Cronau 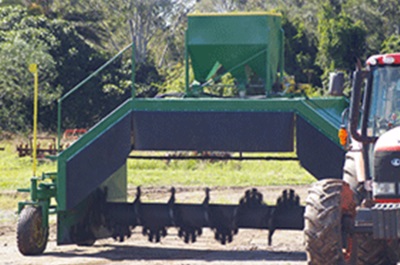 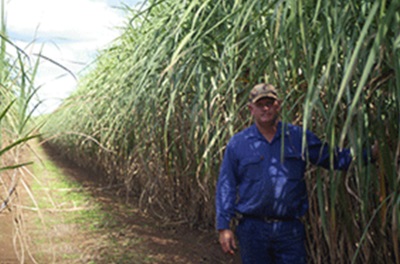 Following the previous cane crop, soybeans were planted through the trash and compost was applied.